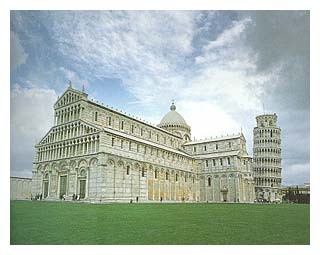 Tuscany was first inhabited by the Etruscans. Most of our knowledge of their civilization is derived from archeological findings in Tuscany itself and across the Apennines in neighboring Emilia-Romagna. The Romans conquered the region in the mid-4th century B.C., and after the decline and fall of Rome, the area became a Lombard duchy with Lucca as its capital, and still later a powerful fief under the Franks. Later, Tuscany became part of the papacy lands, causing a long-lasting strife between popes and emperors, and their backers - the Guelph (pro-papal) and Ghibelline (pro-imperial). The historic and artistic legacy of Tuscany's past is embedded in both the folk festivals that take place throughout the year and the rich artisan traditions that still survive today, including the maintenance and restoration of the existing historic artistic and architectural treasures and a working artistic crafts community.

It is the region's famously undulating countryside which is particularly charming (a mere 8% of of Tuscany's land is flat). These same serpentine hills inspired the Florentine painters of the Italian Renaissance and have attracted so many British people throughout the centuries, that Tuscany has been described as the most British of all Italian regions. But the countryside is not merely pretty - its soil and the climate are ideally suited to vines which have flourished here for centuries. Indeed, Tuscany's wine industry counts on one of the most noble and ancient traditions that predates the universally known Chianti wine which so often first springs to mind in discussion of the region. Long before the first Etruscans made their appearance, wild vines grew in abundance. The Etruscans are believed to have domesticated and bred the forbears of such grapes as Sangiovese and the Lambrusco from those early feral vines.

Of all Italy's wine regions, Tuscany's revolution has probably being the most noticed worldwide, when the region shifted from frivolous styles of straw-basket Chianti to become one of the nation's most creative producers of premium wine [more on this below]. 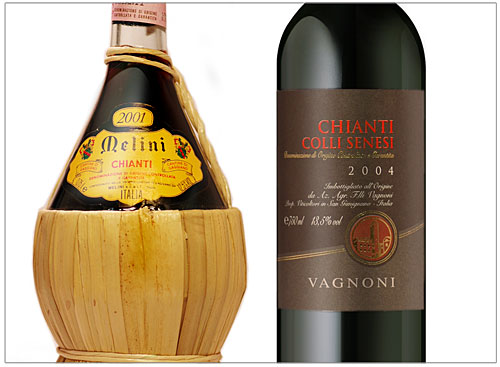 Chianti, however, remains at the forefront as the most representative Tuscan red wine. Made from various grape varieties of which Sangiovese is the most predominant, Chianti (named after the area where it is produced) became only the fifth wine to be designated DOCG in 1984 (the top-flight category of the best of Italian wine). The variety seems to ripen consistently in the sun drenched hillsides at altitudes between 150m and 500m above sea level. Viticulturalists believe the significant day / night (diurnal) temperature variations are also important factors determining the wine's quality. Ever since the Iron Baron, Bettino Ricasoli, created the official "recipe" for Chianti back in the mid-1860s, the wine has undergone many changes and is available in a range of styles as varied as the many varietals, regions and inhabitants of Italy. It can be a bright, quaffable, simple red (as served in a straw-covered flask above, appropriately named a "fiasco"), but it is it's opposite expression as a massive wine with earthy, spicy and violet notes that has captured the imagination and continues to charm wine-lovers world wide.

The Chianti zone is also Tuscany's largest classified wine region, split into two zones:
The Chianti Classico zone covers the area between Florence and Siena that is the oldest, most prestigious Chianti region; here some of the best expressions of Chianti are produced. The larger Chianti DOCG zone is further divided in six DOC sub-zones and areas in the western part of the province of Pisa, the Florentine hills north of Chianti Classico in the province of Florence, the Siena hills south of the city in the province of Siena, the province of Arezzo and the area around the communes of Rufina and Pistoia. Most producers belong to a consortium, known as 'Consorzio del Chianti Classico', whose insignia is a black cockerel, which further guarantees the quality of the wine. Another well known trademark is the cherub of the Chianti Putto consortium, that groups together many producers outside the 'Zona Classica'. A third designation, 'Chianti Superiore' refers to wines produced in the provinces of Florence and Siena but not in the Classico zone

Since being elevated to DOCG status, Chianti's quality has increased while volume has declined. The binding force remains Sangiovese, used to make all of the classified wines. Although several other varietals including Canaiolo, Colorino, Cabernet and Mammolo are blended in (with occasional traces of the white grapes Trebbiano and Malvasia), emphasis is always on Sangiovese (minimum 75%) with each producer dictating a proprietary style. In which ever form one finds it, Chianti is the most widely sold of Italy's classified wines and it reflects the soil and climate of the distinct sub zones in which it is made as well as the individuality of the producers. Cult wines known as "Super Tuscans" developed from the late 1960's and early '70's. During this time, consumer market for Chianti wines was suffering and the wines were widely perceived to be lacking quality. Many Tuscan producers thought they could create better quality wines if they were not hindered by DOC regulations. Starting with Sassacaia, which introduced the unorthodox use of Cabernet Sauvignon grapes grown in the Bolgheri area and Bordeaux vinification, early Super Tuscans were firstly semi-experimental diversions. At least until some startling results from such Sangiovese-Caberent blends as Tignanello from Antinori were realised. The 'Super Tuscan' category itself is unofficial and not recognized by the Italian wine classification system. Instead they are classified as 'Tuscany IGT'. This has not stopped the trend of creating high quality non-DOC wines spreading to other areas of Tuscany and beyond, to areas such as Piedmont and Veneto.

Apart from Chianti and its 'super' cousin, the second brightest star in the Tuscan firmament is Brunello di Montalcino, made south of Siena, around the village of Montalcino. The quality of these reds has been attributed to what some consider to be a superior clone of Sangiovese, (the 'Sangiovese Grosso' that Ferruccio Biondi Santi isolated in his "Il Greppo" vineyard back in the 1880's), however the warmer, drier climate of the area (as opposed to Chianti) ensures that Sangiovese reaches its maximum ripeness here, resulting in fuller, richer wines than anywhere else in Tuscany with atypical alcohol levels that frequently reach 14% Alc./Vol plus. Many Brunellos still tend to be very tight and tannic in their youth, needing at least a decade or two before they start to soften. Not surprisingly, these wines are required to be aged for at least four years prior to being released, with riserva wines needing five years. The recent introduction of "Rosso di Montalcino" offers a wine of similar pedigree but with less time in oak, forcing the fruit notes to the forefront to offer a style that is more approachable in its youth. 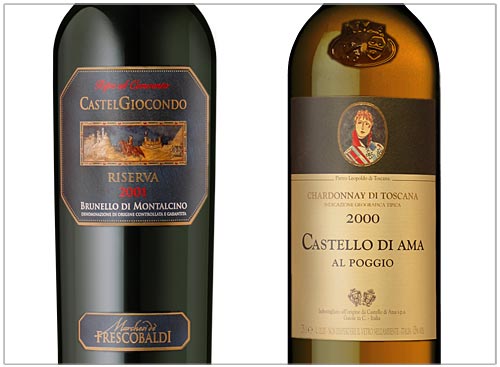 Brunello de Montalcino (left) can be particularly expensive. Chardonnay from Tuscany is also becoming common.
Such 'international' varietals are being widely planted throughout Italy.

Similar to Chianti is Vino Nobile di Montepulciano, a wine that has been produced for centuries by the nobility of the area with a DOCG covering the red wine of the Montepulciano area. Located in the southeastern region of Tuscany, the climate here is strongly influenced by the sea. The variety of Sangiovese planted is known as 'Prugnolo Gentile' and is required to account for at least 80% of the blends. Traditionally Canaiolo and Mammolo makes ups the remainder, but some producers have begun experimenting with Cabernet Sauvignon and Merlot. Vino Nobile di Montepulciano must be aged for a minimum of two years before release. Another robust red made in the area is the ancient Carmignano (also now DOCG). This wine is very similar in style and grape composition to Chianti, and was the first Tuscan red permitted to employ up to 10% Cabernet in its blend. 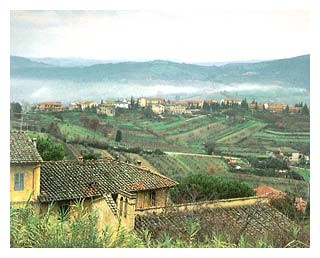 Among the notable Tuscan whites, Vernaccia di San Gimignano made from the Vernaccia grape now enjoys DOCG status. This fresh, slightly acid, golden yellow wine with a deep bouquet is named after the mediaeval town of San Gimignano, famous for its majestic towers. More recently, some producers have experimented with aging and/or fermenting the wine in oak barrels in order to give the wine a sense of creaminess or toastiness. Another white comes from near Pisa, Bianco Pisano di San Torpe, which is fresh and fruity. The large island of Elba, to which Napolean Bonaparte was exiled, 20 kilometres from the coastal town of Piombino, also produces two wines by the same name, one white and one red.

Finally, no profile of Tuscan viniculture would be complete without mentioning 'Vin Santo' - Tuscany's famous "holy wine". This lush, amber-coloured nectar is made from hand selected Malvasia and/or Trebbiano grapes which are left to dry in an airy place until the start of Holy Week. This step increases sugar concentration in the fruit prior to pressing. Vin Santo is always consumed after a meal, traditionally served with the local almond biscuits, but also works well with cheese, pastry or Christmas pudding, with the wine generally exhibiting nutty overtones, complimented by rich apricot and dried fruit notes.

Tuscan wines have never been in doubt and although Chianti may have had its ups and downs, the local wine industry seems guaranteed to only get better.