This southern most point of the Italian peninsula, often referred to as the 'toe' of Italy, is a beautifully wild region stretching out towards the island of Sicily. Only five percent of agricultural land is planted to vine, with most vineyards close to the northern Tyrrhenian coast or the southern Ionian coast. Only 3 percent of the annual crop is used for the production of DOC wines. Dominated by mountains, Calabria is marked with varying microclimates from the warm coastal zones of the Ionian and Tyrrhenian seas to the chilly heights of the Sila and Aspromonte massifs. The coastal areas, in direct line of the maestrelle winds from Africa are practically sub tropical whereas the mountain heights are alpine. At higher altitudes, vineyards are susceptible to spring frost while coastal vineyards often experience summer storms caused by clashes of maritime and mountain currents.

The original name of Calabria was, surprisingly enough, 'Italia'. The name was either derived from the Italic tribes who first inhabited the region or from the land's geography, wood rich mountains full of 'vituli' or caves. In later times the area was known as 'Brutium' before being colonized by the Greeks and then re-named Magna Grecia or "Great Greece". The name was eventually changed to Calabria in the 7th century A.D., when the Byzantine rulers merged the region with the Salentine Peninsula which already bore that name. As in other southern areas, the Greeks were the first to introduce many grape varieties and winemaking techniques. The indigenous people became so adept in the art of vine cultivation and fermentation that soon the wines produced in the colony were considered better than those made in Greece. The area was called 'Enotria' or Land of Wine, a definition that later was extended to much of the Italian Peninsula. An ancient wine from Kremisi, 'Cremissa', was used to toast the victorious athletes at the ancient Olympic games. 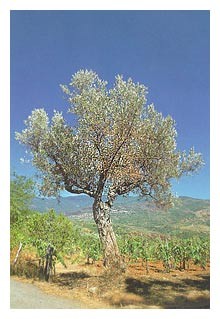 Today, Calabria's important DOC and most recognized red wine is Ciro, (allegedly the descendant of the famous 'Cremissa'). It is a full-bodied and powerful wine made from at least 95% Gaglioppo (an ancient vine either native to Calabria or brought to the region by the Greeks). The wine strikes a graceful balance between soft, ripe fruit and gentle tannins, with the reserve version having the capacity to age beyond a decade from good vintages. Prominent in the low hills of the Ionian Coast between the cites of Sibari and Crotone, local legend states that Ciro descended directly from Krimisa, the wine Calabrian athletes drank to celebrate victories in the early Olympic games. RosÃ© and white versions are also made. The rosÃ© is lighter and fresher, with a more pronounced fruity bouquet, and, like the delicately balanced white, should be drunk young to fully appreciate its character.

From near Cosenza comes Savuto, it also has a long history dating back several centuries. This is a red, dry, balanced wine, also produced from Gaglioppo with moderate aging potential. Another dry red produced nearby is Donnici. From near Reggio Calabria, in the very tip of the peninsula, comes Greco di Bianco, a strong, warm, gold-amber coloured white dessert wine, velvety and rich produced from partially dried Greco grapes - arguably Calabria's most distinguished wine.

Viticulture and winemaking in Calabria is making slow progress, exports remain insignificant and the region's wines are not well known outside Italy.