The Nant Distillery is located on a private country estate at Bothwell in the Central Highlands of Tasmania. First settled in 1821 and listed by the National Trust, the historic convict built sandstone homestead and farm complex are certainly a picturesque place for whisky production. Keith and Margaret Batt bought Nant in 2004 with the intention of breathing life back into the historical estate, restoring each element from the old waterdriven flour mill to the homestead and farm. Their vision involved extending the mill's use to include a full production whisky distillery, private tasting room and an atrium lounge and whisky bar. 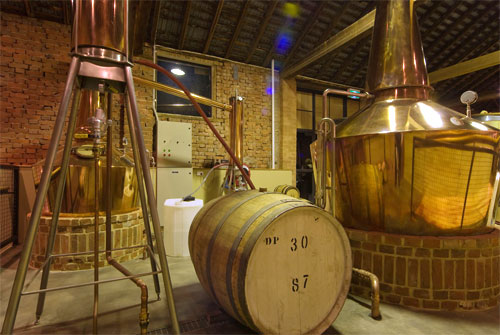 Chris Condon (formerly of Boags brewery) and his wife Kym joined the distillery in late 2007 and live on the estate, with Chris employed as the production manager. "We're trying to make a Single Malt that will be unique on the world stage" says Nant Director, Keith Batt whose first whisky memory was late evening on a track in the Walls of Jerusalem  National Park in Tasmania, watching the trout rise with a great dram in hand. "We grow our own barley, malt it, mill it, brew it, distill it on site. Our  spirit still is unique to the Australian whisky industry in that we have an onion shaped neck which produces a lot more reflux in distillation. This means that  our distillation process is longer than any other distillery producing a very fine and light spirit". It takes around a week to produce from brewing to distilling.

Batt is confident that a single malt will be ready for bottling in 2010 while a 'single estate malt' will be ready in 2011. Nant also source  grain from the famous Cascade Brewery. Barrels are from Europe and America which have previously held port, sherry or bourbon, while the stills have been made in Hobart to Nant's specifications. The distillery draws its water directly from the historic Mill Pond on the estate which is fed by the Clyde River, flowing from the highlands of the Tasmanian Central Plateau.