Origins of the Cocktail 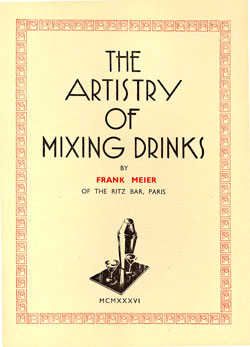 The legendary Frank Meier, head bartender at the Paris Ritz during the 1920's and '30's, published his Cocktail recipes for favoured customers in his classic "The Artistry of Mixing Drinks (1936) pictured right. Apart from expounding the bartenders art, the book is filled with eclectic information including horse-racing history, hangover tips, how to remove spots and, most helpful to certain young women, carat weights for precious stones. Here we re-produce the introduction to the book, which serves both as a breif history of the cocktail and an abstract of Meier's philosophy.

Introduction:
The Artistry of Mixing Drinks

Many will ask what is the origin of Cocktails.
I have recently had the occasion to investigate the origin of the name "Cocktails ". The inventor of this boon to mankind will perhaps always remain unknown. But, in going through some old documents, I find the following story, which, authentic or not, may please many: In 1779, Betsy Flanagan set up a Tavern near Yorktown where the American and French officers of the Revolutionary Army met and enjoyed a new sort of drink compounded by Betsy which became very popular and was called a "Bracer". In the neighbourhood an Englishman kept splendid poultry imported from his mother-country. Betsy Flanagan was fiercely hostile to this gentleman and was always promising to feed the American and French officers with a fine fowl that was in the loyalist's grounds. From time to time they would tease her about the delay in carrying her promises into effect. One night, when there was an unusual attendance of these officers at the tavern, she invited them into her dining room where was spread a bountiful feast of chicken. The Englishman's chicken coop had been raided. When the chicken banquet was over, Betsy invited the guests into the bar, and with great pride pointed to the chicken tails spread gracefully around bottles of "Bracers ". The surprise was complete and the event recognized by three hearty cheers for Betsy Flanagan, the cause of the Colonists and confusion to the English. The " Bracers " came off those shelves in a great hurry and the remainder of the night was passed in the bar-room amidst the 'Cocks' Tails" and the inspiring "Bracers ". "Give us some more of those ' Cocktails '," was the frequent order; "Vive la Cocktail," shouted a French officer. This was the keynote to the now celebrated name. It stuck.

The above narration may be truth or fiction ; what still remains a fact that has been known for over three generations throughout the civilized world is that, by using the finest ingredients, and mixed with care and precision, the Cocktail will always be the drink of good-fellowship. More and more they are becoming popular, thousands of people on every part of the globe drink them, but few have acquired the art of mixing a perfect drink. The Cocktail should always be perfect: there is no reason ever to drink a bad one. Almost any of the ingredients of which Cocktails are composed might better be consumed straight rather than just carelessly poured together. To have a perfect blend and smoothness use only the finest ingredients in making your drinks. A Cocktail is one of the last words in the "artistry of mixing ". Aged whiskeys in Manhattans, that supreme Gin, which is "The Heart of a good Cocktail ", in Martinis and Broix, and specially selected Vermouths in both. Mix with infinite care and the result will be the Miracle-Cocktail which has made the Ritz Bar famous. 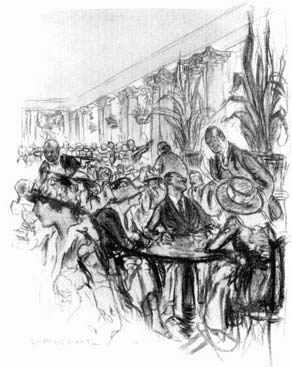 My introduction would not be complete without a word to the younger generation. Now, as in the past, the art of rational drinking is an accomplishment as indispensable as dancing or bridge, and a fair knowledge of wines and liqueurs, their provenance, characteristics, best years, etc., etc., forms part of a gentleman's culture. The passing generation of Englishmen knew wines, and it is my sincere hope that this knowledge be increased, throughout the world.

Any young man who can convince me that his lips will never touch alcohol need not follow my required course in drinks and drinking. To know how to drink is as essential as to know how to swim, and one should be at home in both these closely related elements. Each man reacts differently to alcohol ; he should know before the time when, according to custom, he indulges in his first collegiate " binge", whether liquor affects his head, his legs or his morals; whether he sings, fights, weeps, climbs lamp-posts or behaves with excessive affection toward the opposite sex; whether, in short, it makes him a jovial companion or a social pest. A knowledge of these weaknesses will help to overcome them. Know your capacity and stay within limits. One can drink sensibly, if one knows what a chaos a mixture of liquors can produce. "In vino veritas", so often quoted, does not mean that a man will tell the truth when in drink, but will reveal the hidden side of his character.