3.8 The Principles of Corkscrew Design

The challenge presented to corkscrew designers is simply stated: a compressed elastic stopper is inserted into the neck of the bottle and it expands and clings tight to the sides of the bottle. Once in place, it requires approximately 100 pounds of force to extract. Inventors have pondered over the best way of achieving this extraction for over three centuries and their response has been curiously disproportionate to the scope of the challenge. So much so that the development of the corkscrew has come to represent a study in human ingenuity and imagination.

The official history of the modern corkscrew is marked by the earliest patent issued for such a device - granted in 1795 in England to Reverend Samuel Henshall. He improved upon whatever had preceded his model, by affixing a simple disk, now known as the Henshall Button, between the worm and the shank. This disk"...prevented the worm from going too deep into the cork, forcing the cork to turn with the turning of the crosspiece, and thus breaking the adhesion between the cork and the neck of the bottle. The disk was designed and manufactured slightly concave on the underside, which compresses the top of the cork and helps keep it from breaking apart..." (1)
The Henshall button was considered a revolutionary idea in corkscrew design and as a consequence, such corkscrews were extremely popular and continued to be produced well into the 20th century.

Since Henshall's time, literally thousands of designs have been patented to inventors seeking still better methods - some marvels of engineering and design, others remarkably inadequate to the task. Innovations have introduced"...ratchets, springs, prongs, clutches, levers, and even Teflon coated worms. Other inventors included a corkscrew as an accessory on multipurpose tools including knives, can openers, wrenches, jar openers, bottle cap lifters, and champagne cork grips". (2)
Despite this proliferation and variety, some essential commonalities have remained, and corkscrews today can be defined within four basic categories according to their modus operandi*, namely Leverage, Torque, Air Pressure or Prong.


Elements of a Perfect Corkscrew

In any traditional corkscrew, the design of the twisted rod that penetrates the cork (known as the 'worm')  is all important.
The worm should be 45-60mm long in order to grip the cork.
The point of the worm is critical. It should be sharp and follow the shape of a helix, so that it guides the rest of the worm into a pathway into the centre of the cork.  A corkscrew with a point that ends in the middle of the worm, while easy to centre, actually drills its way through the cork, as the point and the helix of the worm are traveling along two different paths, "breaking new ground" so to speak,  all the way down through the length of the cork.

Worms that look more like a drill bit than a sleek spiral are also inferior. The former will not grip well and will tend to bore a hole in the cork like an auger, rather than cleanly penetrate it. The result is a shower of cork dust  on withdrawal, often with the remainder of the cork still in the neck of the bottle or 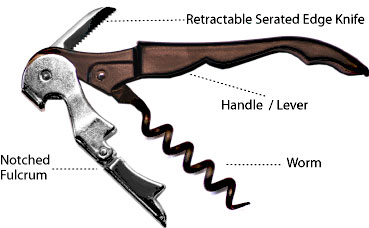 floating in the wine. Most of the popular 'wing action' corkscrews seem come with auger screws.

Of all the corkscrews in the world there is nothing quite as practical, reliable and portable as a waiter's friend. Invented by a German, Carl F.A. Weinke, who obtained a patent in 1883, the waiter's friend is an extremely simple but effective lever device. It is usually composed of  a single lever and corkscrew, with a knife for removing foil capsules. Well designed versions  fold away comfortably enough to carry in one's pocket without getting poked. We consider the Pull Tap's waitersfriend model [pictured right] to be the most practical and affordable corkscrew on the market. Its superb design and functionality includes a Teflon coated worm, double jointed lever action and a serated edge knife. You'll find it capable of extracting the most difficult and fragile of corks.Click here to purchase online.


The Three Stages of Removing a Cork

1. With a sharp knife, or foil cutter, cut the top of the capsule neatly at the top of the bottle rim, not the bottom. It is considered inappropriate to remove the entire capsule, as this forms an integral part of the bottle's 'dressage' and should be admired along with the cork and label. Remove the foil and/or wax  before using the corkscrew also helps to maintain the worm's sharpness and slickness. Once the top of the capsule has been removed, with a clean cloth clean away any fungus or capsule deposit. A warm damp corner of the cloth may be useful for older bottles.

2. Using whatever mechanical device you've fallen in love with, insert the point of the worm of the corkscrew into the centre of the cork and carefully turn, making sure not to penetrate the wine-end of the cork. Work slowly in a straight vertical, central line.

3. Place the fulcrum's notch on the edge of the bottle and, on the hand gripping the bottle, use one finger to hold the fulcrum to the bottle. Use the other hand to lift the handle-lever and raise the cork about one-half inch. Pull the cork out of the bottle, then remove the cork from the corkscrew.

A simple procedure,  yet the cause of much anguish if not done properly.

There are other ways of extracting a cork other than using a corkscrew, none of which are particularly recommended. But without wine life can prove to be sheer misery as W.C. Fields discovered, summing up an occasion when"We lost our corkscrew and were compelled to live on food and water for several days".

The obvious method involves pushing the cork into the bottle, which can be achieved in a variety of ways, using a clean rod of some description, or even a key. (It is recommended when doing this to wrap a towel or shirt around the bottle in case the bottle explodes from the momentary increase in pressure).
If  you happen to be castaway with nothing but your shirt and shoes, holding the bottle upside down, you can use a shoe as a mallet: A good solid whack with the heel of the shoe (a hard rubber heel works best) on the bottom of the bottle  causes the cork to slightly raise itself out. Several solid whacks to the base of the bottle can be enough to raise the cork high enough to be removed by hand.  Any wide threaded screw and a pair of pliers also makes a good substitute for a missing corkscrew.

The world famous wine writer, Hugh Johnston, in an essay on corks, has the last  word on corkscrew improvisation describing what must arguably be the crudest method of all:"...take the heaviest kitchen knife you can find ..... run the blade up the neck as hard as you can, hitting the collar of the bottle a terrific whack, and the neck should break off cleanly".
Admittedly, he suggests it only for a cork that is totally unresponsive.
...Frankly, the procedure is not recommended.

For those wine lovers fascinated by the history of corkscrews and or corkscrew collecting, the following links have been included to continue your path of discovery.

The Virtual Corkscrew Museum is the site of a voracious corkscrew collector, Don Bull, who has published several books on corkscrews including The Ultimate Corkscrew Guide.

CorkscrewsOnline has many wonderful corkscrews for sale and offers good information and tips on corkscrew collecting.

* No doubt some restless inventor is presently designing a laser extraction technique or some similarly extravagant device.
1. www.corkscrew.com
2. Bull's Pocket Guide to Corkscrews. Don Bull. Astragal Press, 1999.
A great reference especially for collectors, all corkscrews are photographed in full colour and classified categorically, along with their current market values.