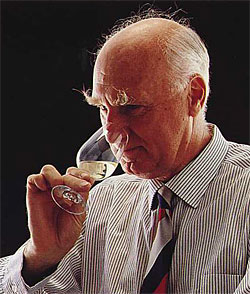 The variation of descriptors that are used by various wine writers can create a great deal of confusion.Dr Bryce Rankine [pictured right] is one of one of Australia's leading wine Academics, and is responsible for creating this Glossary of Wine Tasting Terms that is being presented in association with Vintage School. We consider Dr Bryce Rankine's Wine Glossary as the benchmark, and thus encourage wine lovers to use these definitions in their notes and discussions on the smell and taste of wine.

Belonging to a Wine and Food Club enables many people to enjoy and appreciate wines in convivial company. A problem associated with this is being required to speak about a wine to one's peers, and groping for the words which accurately convey one's palate impressions. Communication in wine tasting depends on just this using words which convey the subjective nose and palate impression of the wine. In order that one wine tasted by several tasters should be reported in the same way, it is necessary for the tasters to use the same words for the impression which the wine creates.

Accordingly, at the request of the Wine and Food Society in Australia, I have compiled the following tasting terms which now constitute the Society's official list of tasting terms. Some foreign terms which have become part of Australian wine nomenclature are also included. Extensive lists of tasting terms exist, particularly in the French language, and various overseas lists of tasting terms contain a preponderance of French terms. Some of these do not have precise Australian and New Zealand counterparts and are not used in these countries for serious tasting. For example, the often-used French term 'souple' does not mean 'supple' or 'pliant', as the dictionary would indicate, but 'smooth' or 'harmonious'.

Where possible, terms have been quantified by using the results of threshold taste measurements. Similarly, particular chemical constituents of wine are listed against certain of the tasting terms, together with legal maximum limits where appropriate. The description has been augmented by indicating whether the particular term relates to sight (appearance of the wine), smell (aroma and bouquet), and/or taste, as indicated: