The Medoc and Graves include ten AOCs, including reds to the north in Medoc, and both reds and whites to the south in Graves. The reds, which are made primarily from Cabernet Sauvignon and Merlot, are well structured, full and rich with significant aging potential. The whites, which may be dry or medium sweet, are blends of Sauvignon and Semillon.  Representing approximately 15% of wine production in Bordeaux, this AOC family includes all of the winemaking areas situated on the Left Bank of the Garonne River. The Medoc, located north of the city of Bordeaux, and the Graves, in the south, share temperate weather conditions due to the proximity of the Atlantic Ocean, as well as soil containing stones and sand carried by the river from as far away as the Pyrenees Mountains. A great number of the Bordeaux classified wines are produced in the Medoc and Graves, such as the 1855 Grands Crus Classes, the Crus Artisans, and the Graves Crus Classes. The name Medoc comes from the Latin "in medio aqua", meaning "in the middle of the water". The geographic disposition of this peninsula, with the Atlantic Ocean on one side and the Gironde river on the other, confers a gentle and temperate climate, sheltering over 1500 Chateau properties. While this appellation includes all of the winemaking areas north of Bordeaux, on the Left Bank of the Gironde it is mostly in the northern point of the peninsula that the majority of the Medoc AOC wines are produced. Soils are composed of terraces of alluvial gravel deposits, separated by tiny streams which provide an excellent drainage system. The light soils are highly suited for growing Cabernet Sauvignon. Merlot, on the other hand, prefers deep clay soils located between the gravely terraces. The two dominant varieties are Cabernet Sauvignon and Merlot, which alone represents 50% of planted surfaces. Petit Verdot and Malbec are sometimes added to improve the tannic structure, colour and fruitiness of wines during blending. The district  is generally considered  a source of inexpensive, good-value, basic Bordeaux.  Noteworthy properties include: Haut-Condissas, Le Boscq, Rollan de By, Lafon, Loudenne, Ormes-Sorbet, Patache d'Aux, Potensac, and Tour de By.

The vast Haut-Medoc accounts for approximately one third of the Left Bank's total vineyards. It is the region of the Medoc located closest to the city of Bordeaux and contains six other appellations including  Margaux,  Pauillac,  Saint-Julien and  Saint-Estephe, enclaved in the district's centre.  The Haut Medoc AOC which was separated from  Medoc's appellation in 1936, includes 25 townships. The diverse soils include well-drained alluvial gravel terraces are best suited for the growing of Cabernet Sauvignon (52% of planted surfaces). This being the dominant variety in Haut Medoc wines, is blended with Merlot. Petit Verdot, and, to a lesser extent, Malbec are also often added. The Haut-Medoc appellation itself has five "Grand Cru Classe" - or Classified Growth properties: La Lagune, La Tour-Carnet, Belgrave, Cantemerle and Camensac, as well as several quality properties such as Agassac, Cambon la Pelouse, Coufran, Arche, Malescasse, Cissac, Hanteillan, Lamothe-Bergeron, Lanessan, Larose Trintaudon or Senejac.
The official decree for the Haut-Medoc AOC defines strict production norms: a high planting density (a minimum of 6,500 plants/ha) and low maximum yields (48 hL/ha). Named after the numerous windmills ("moulins" in French) scattered throughout the countryside, Moulis has welcomed vines since the 13th Century, but its current reputation only took off after the French revolution (1789). Today, Cabernet Sauvignon and Merlot are planted in equal proportions with smaller areas of Cabernet Franc and Petit Verdot. Like Listrac Medoc, this appellation is protected from prevailing winds by a vast pine forest that grows alongside it. Terroir is composed of gravel terraces alternating with silt and limestone soils typical of the peninsula. As with other communal appellations, the production norms are particularly strict: maximum yields of 45 hL/ha, and a planting density of between 6,500 to 10,000 vines/ha. The appellation's best properties include Brillette,  Chasse-Spleen and Poujeaux.

Despite its fame, this prestigious appellation was only decreed in 1954 and today consists of five communes: Soussans, Margaux, Arsac, Cantenac and Labarde.  Distinguished by its poor soil, composed of a plateau of gravel and silt based on a layer of limestone or silt with clay, the region has been prized since the Gallo-Roman era for the production of great wines. The climate is tempered by the proximity of the Gironde Estuary, and excellent natural drainage makes for conditions conducive to the vine and to the proper ripening of the fruit. Today, one third of the Grands Crus Classes from the 1855 classification and Crus Artisans are produced in Margaux. These wines are made from blends wherein Cabernet Sauvignon dominates, to which Merlot is added along with small quantities of Malbec and Petit Verdot. The wines are considered to be amongst the most elegant and aromatic of the Haut Medoc with excellent ageing potential.
The appellation's best properties include Chateau Margaux (First Growth), Palmer (unusual for the high proportion of Merlot (equal to its content of Cabernet Sauvignon), Rauzan Segla, Ferriere, d'Issan, Brane Cantenac, Kirwan, Giscours, Prieure Lichine, Labegorce Zede, La Gurgue, Cantenac Brown and Rauzan Gassies.

Arguably Bordeaux's most prestigious wine producing region, Pauillac is a port located on the Gironde Estuary, but the vineyards are perched on a magnificent hilltop of well drained, sandy gravel soil in the heart of the Medoc. The soil is so light and poor that little will grow except grapevines, whose roots penetrate a layer of cool and compact clay and limestone (also know as hardpan) to find nutrients.

The appellation has the greatest concentration of First Growths in the Medoc. These include the famous two 1st Classified Growths - Lafite Rothschild and Latour. Mouton Rothschild joined the duo in 1973 after Edmond de Rothschild finally obtained a partial revision of the historical classification. There are 18 Grands Crus Classes within Pauillac's borders which account for 80% of the area's total production.  Not surprisingly, Pauillac today is synonymous with perfection and represents the pinnacle of Medoc wines. Cabernet Sauvignon, which accounts for 65% of planted surfaces in this area, is at its most majestic in Pauillac. (Merlot, and much smaller quantities of Petit Verdot or Malbec may find there way into blends). The region's full-blown, sometimes opulent  fruity, powerful and complex wines are beautifully  balanced by an incomparable  tannin structure that sees its wine's ageing potential frequently fall between 10 and 20 years -  from the fine elegance of Lafite Rothschild, to the restraint of Mouton Rothschild that turns to opulence with age, and the sheer power and longevity of Latour. Pichon Lalande is arguably the most important of the Second Growths, followed by Lynch Bages, and Pichon Baron, which has been revived recently, but the same range of styles and character is found through the entire level of classification.
Significant properties of the appellation include:  Lafite Rothschild,  Mouton Rothschild,  Latour, Lynch-Bages, Pichon Longueville Comtesse de Lalande, Pichon Longueville Baron, Grand Puy Lacoste, Pontet Canet, Clerc Milon and Duhart Milon.

Saint-Estephe is the largest appellation commune in the Medoc,  located halfway between the city of Bordeaux and the estuary of the Gironde, right after Pauillac. The appellation was planted with the arrival of the Romans and the vineyards developed under the guidance of important landowners in the 19th Century, while negociants from the place de Bordeaux secured the regions' reputation. Beautiful chateaux, emblems of the power and dynamism of this period, still stand today. The terroir of Saint-EstÃ¨phe is somewhat cooler than others in the Medoc because of its more northerly setting. With good natural drainage, the soil is heterogeneous, being composed of a gravel-covered plateau overlooking the Garonne River. On the surface, the soils appear light, typical of the Medoc, but underneath, a layer of clay and limestone enables the vine to take the best of what the earth has to offer.

Robust, powerful wines of the region generally require a long ageing before revealing all their richness and potential. The best examples of these wines, produced largely from Cabernet Sauvignon blended with Merlot and Cabernet Franc, include those from Chateaux's Cos d'Estournel, Haut Marbuzet, Montrose, Calon Segur, Meyney, Phelan Segur, de Pez, Lafon Rochet and Ormes de Pez. The region's reputation for 'hard' tannic wines is typified by the lesser growths; the two top properties, the Deuxieme Crus Cos d'Estournel and Chateau Montrose, usually produce very full wines. With the movement to wines that are fruitier and that drink well sooner, Cos d'Estournel has overtaken Chateau Montrose (which used to be famous for the long term cellaring it required to become drinkable) as the leading property in the appellation, and it is usually considered one of the "super-seconds" that are considered to be close to the First Growths in quality.

At the geographic centre of Medoc lies Saint-Julien. Located near the port of Beychevelle, about 45 kilometers North-West of Bordeaux downstream the Gironde, this terroir is well known for the quality of its soil and its excellent drainage. On the gravel-covered terrace created by the Garonne rest clay-limestone, large stones and hardpan, particularly well suited for growing Cabernet Sauvignon. The appellations best wines tend to combine power and concentration with a feminine elegance, but require some patience to be appreciated at the maximum of their potential with average aging usually 10 -15 years. Wines are comprised mostly of Cabernet Sauvignon, blended with Merlot and, to a lesser extent, Cabernet Franc and Petit Verdot.
With eleven Classified Growths including five superb second Grands Crus Classes, Saint Julien remains a very desirable appellation, often favorably compared to Paulliac. Some properties of note include Chateaus Leoville las Cases, Leoville Barton, Ducru Beaucaillou, Gruaud Larose, Saint Pierre, Langoa Barton, Leoville Poyferre, Gloria and Talbot.

With a slight predominance of Merlot (50% of planted surfaces), and a strong minority of Cabernet Sauvignon (40%), these wines are a perfect example of the Bordeaux balance between suppleness and firmness, richness and aromatic persistence, with good ageing potential. The appellation stretches for 50 km along the Garonne River southeast of Bordeaux and takes its name from its soil (Graves is French for 'gravelly terrain'), a mix of stones and gravel, carried by the Garonne from the Pyrenees, over 500 km away. The pebbles and stones are mixed with silts and light clays and rest on a soil that is sandier than that of Medoc and can be pure sand or hardpan (iron-oxide cemented sand). 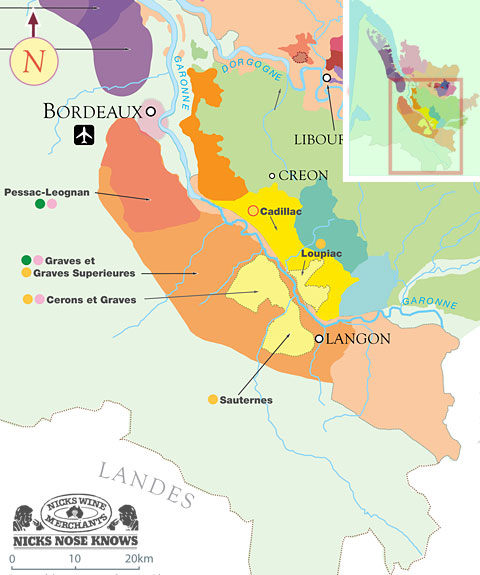 Protected from poor weather by a dense pine forest and from heat by the breeze from the river, the Graves terroir has an excellent micro-climate for vines. Some of the more famous properties include Pape-Clement and Haut Bailly. Below is the official classification from 1959.

Pessac-Leognan is reputed to be the place where wine growing began in Bordeaux around 2000 years ago. Since the Roman era, the aptness of this terroir had been recognized and its wines have been famous in Europe since the Middle Ages. Yet despite its ancient terroir, it is the most recently decreed left bank appellation, originating in 1987, when the Graves district  was split in two.  Situated immediately south of Bordeaux and literally surrounded by urban development, the Pessac-Leognan vineyards owe their reputation to their Crus Classes composed of Cabernet Sauvignon, Merlot and Cabernet Franc.  Soils possess excellent drainage and are composed of a particularly thick layer of gravel and stone. Underneath lies sand, hardpan and clay in variable proportions. Further away from the city, the vines are planted in vast clearings, surrounded by pine forests in the south west that protect the vineyards from humid western winds. Balanced and elegant when young, these wines have a structure and depth that allows them to age for many years. The wines tend to reveal earthier tones compared with the Medoc, and are often described as showing smoky, cigar-box aromas. Ch Haut-Brion is the most famous exponent of the style.