Introduction to the 'Hills' of Bordeaux

The wines produced here, mainly red, distinguish themselves by their strong character, aromatic power and well balanced structure. Although Merlot dominates, the blends always include Cabernet Sauvignon and, occasionally, Cabernet Franc. Certain Cotes AOCs produce a significant amount of medium sweet and sweet wines, thanks to a specific micro-climate that favours the over-ripening of the grapes. The Cotes (literally 'hills') are located in the east, on steep slopes of hills and valleys created by the Garonne and Dordogne rivers that flow through the area. Often facing south or southeast, the vines that grow on these slopes have excellent exposure to the sun. With similar clay-limestone soils, the Cotes includes some quality wine-producing terroirs and represents 14% of Bordeaux wines. The Premieres Cotes de Bordeaux vineyards have being planted out since the Roman era and the district long benefited from its proximity to the city of Bordeaux, from where it exported its wines to England and the rest of the world. Overlooking the Garonne River, the appellation is a succession of hills with excellent exposure to the sun, producing more generous wines which have a good ageing potential but can also be enjoyed young.  The vineyard of the Premieres Cotes de Bordeaux spreads over a 60 km strip along the river, from Bordeaux to Langon. Here, there is no thick layer of stones and pebbles but, rather, dense and deep clay limestone or clay gravel slopes. Well drained due to the natural inclination, these soils also have fine elements in lower areas, such as silt and clay, or coarser elements higher up on the hills, such as rocks and gravel.

This AOC is located on the right bank of the Gironde. Vines benefit from a clay-limestone terroir of hills perpendicular to the Gironde Estuary, perfectly exposed to the sun. Produced from a blend of Merlot, Cabernet Sauvignon, Cabernet Franc and Malbec, and occasionally Petit Verdot, these wines are concentrated, balanced, well structured, and develop beautiful bouquets over time. The Blaye AOC, established in 1936, was relaunched in 2000 by winemakers who agreed to work with severe production limits to produce higher quality wines. Plantation density is set at a minimum of 6 000 vinestocks per hectare, and wines must be aged at least 18 months before being sold.

The largest of the Cote appellations, and most northern (45 km north of Bordeaux), this appellation produces  velvety, fruity, balanced wines. The Blayais vineyards are made up of hills and valleys, with the Gironde Estuary separating Blaye from the Medoc. The position of the hills in relationship to the estuary creates an almost constant ventilation for the vines ensuring healthy, ripe fruit. The nearby water tempers the area's sunny conditions (approx. 240 days of sunshine a year). Clay and limestone soils predominate, ideal for Merlot. As a result, the blends of this appellation combine Merlot (which predominates) with Cabernet Sauvignon and minor proportions of Cabernet Franc and Malbec. Since 2006, this AOC is able to use the term Cotes de Bordeaux, as can the other Cotes AOCs. This appellation also produces dry white wines.

The Bourg vineyards, just south of the Blaye vineyards, are opposite the majestic area where two great rivers, the Garonne and the Dordogne merge, 35 km north of Bordeaux. Here as well, the important presence of water tempers the very sunny microclimate of the hills. The medium surfaces are somewhat poor, as is often the case in the east and north of the Bordeaux vineyards. 250 winegrowers bring their grapes to four cooperatives with the AOC  comprised of 15 communes and 500 winemakers, mostly family based. The soil of the hills has a strong clay limestone base. Sandy gravel deposits are sometimes covered with brown and red marl, suitable for Merlot, and so not surprisingly,  it accounts for 67% of the vines planted in the AOC. Other varieties include Cabernet Franc, Cabernet Sauvignon and Malbec.  In their youth, the Cotes de Bourg wines are often characterized by flavours of red fruits and spices and may be appreciated at a young age for their delightful fruit and balance. Growers also produce wines which have good aging potential.
White Cotes de Bourg are very rare, with only 20 ha in production. A blend of Sauvignon (45%), Semillon and Colombard, they enchant with their vivacity, their fullness in the mouth, and delicately aromatic notes of citrus, peach, yellow and white flowers. Properties include Barreyre, Bel-Air, Bellevue, la Grave, and Renardiere.

Along the Dordogne River, this AOC is an alignment of hills. Composed of 19 villages, some tiny, in the eastern extreme of the Bordeaux region. The wines of this obscure appellation use Merlot as their base which represents 60% in blends. Cabernet Sauvignon is reserved for lighter, warmer soils and represents only 20% of vines planted. Vineyards are generally on the upper reaches of hills and plateaus. The terroir features quite deep soils, with lots of clay and limestone. 60 producers share this small appellation. Some among them have founded the "Club 45" with the idea of lowering their yields to 45 hL/ha, lower than the current AOC requirement of 50hL/ha.

The smallest of the Cotes de Bordeaux AOC's consists of three villages grouped around their historic church. This AOC, created in 1967, is 10 km east of Saint-Emilion and includes around 50 winegrowers. The average area of the enterprises, often family-based, is only 6 ha. The terroir is well aerated, has excellent sunny conditions, very little rain and ideal temperatures to encourage the gradual ripening of Merlot. Being not far from the Dordogne River, the Cotes de Francs also benefits from a certain warmth that tempers the continental weather influences of this zone. Clay and limestone soils overlay chalky sandstone depths.

In the red wines, Merlot is the leader (50% of vines planted), followed by Cabernet Franc (25%) and Cabernet-Sauvignon (23%).  However, as in other AOC's in the east of Bordeaux, it is not unusual to find that Cabernet-Franc is planted more in some vineyards. It matures more quickly, and contributes to creating wines that are more perfumed, rounder and generous. Pleasant to drink young, these wines have a potential to age from 5 to 10 years. There are also some rare bottles of white Cotes de Francs that are blends of Semillon (60%) and Colombard (25%). Good, fruity rich wines, some of which are even sweet. 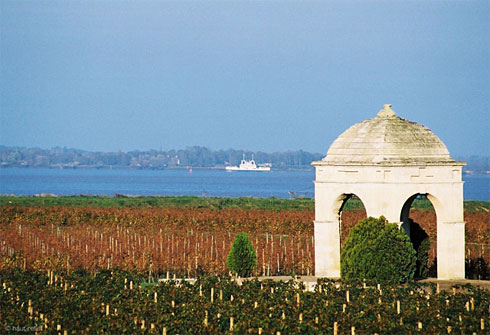 Castillon-la-bataille recalls tragic events in the history of France and England (the battle that took place there in 1453 marked the end of the 100 Years' War). This AOC created only recently in 1989, is hidden behind Saint-Emilion. On the side of the hills and on the plateau, the soil is composed of clay and limestone, with some sandstone.  At the bottom of the hills, on the alluvial terrace, closer to the river, the soil contains more silt and sand, with stones. The wines here are smoother, charming and pleasant, though less powerful. Due to the clay-limestone soils and the more continental weather, Merlot is the primary grape variety in the AOC (70% of vines planted). Cabernet-Franc comes in second (20%) and on warmer plots Cabernet-Sauvignon (more difficult to mature) is also planted. In the past, the regions wines were generally used to enhance Saint-Emilion blendings in poor years. But in the 1970's, a particularly dramatic effort by local wine growers improved the overall quality of production and  in just a few years, Castillon has become a serious competitor of the main appellations of the  right bank. Some of the more highly regarded properties inlcude Domaine de l'A, d'Aiguilhe, Fompeyre, Clos l'Eglise, Guilhemanson, La Tuque Bel-Air, Brisson, Cap de Faugeres, Pin-Beausoleil and le Pin de Belcier. Since 2006, this AOC also can use the term Cotes de Bordeaux, as can the other Cotes AOC's.

Known for its Renaissance Chateau in the Dordogne domain, the AOC Graves de Vayres, which has existed since 1936, has been revitalized since the tragic frost of 1956, when massive replanting was undertaken, with an emphasis upon producing red wines. Situated in the extreme north of the Entre-Deux-Mers region, it is a zone of gravel soil in the middle of a vast region of clay limestone soil (Entre-Deux-Mers). Thanks to the Dordogne, which is very wide here, the Graves de Vayres AOC enjoys a temperate effect during the summer.
Merlot is planted widely (75%), along with some Cabernet-Sauvignon (15%). Wines obtained are smooth and light. Cabernet-Sauvignon brings the wines structure and solid tannins and depending on how much of this variety is in the blend, wines can age from 5 to 10 years.
Since 2006, this AOC also can use the term Cotes de Bordeaux, as can the other Cotes AOC's.