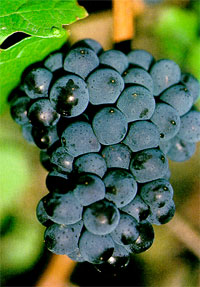 For viticulturalists and winemakers, as well as wine lovers, Pinot Noir has a reputation as one of the most difficult varieties to come to terms with. Those growing and making Pinot Noir as a table wine (as opposed to a Sparkling wine) are at the high end of the passion scale. Creative and adaptive viticultural management and winemaking are essential for any degree of success.

New Zealand seems made for Pinot Noir, where the climate has proven more important than soils for wine quality. (Excellent Pinots have resulted from clay soils to free-draining fluvio-glacial gravels and silts).(21) While experience has shown that only a few parts of New Zealand (notably Hawke's Bay) are able to consistently ripen other red varietals like Cabernet Sauvignon, Pinot Noir will ripen with good flavours and colour in many regions. Though because it ripens very early, it's been found to be most suited to the cool, low rainfall climates of the South Island and lower North Island regions where plantings are concentrated. If it ripens too fast, it fails to develop a desirable flavour profile and can even become jammy.

Importantly, New Zealand has also acquired a highly desirable mix of clones - those like the "Abel" clone, for example (see below) were for a long time jealously guarded and exclusive to Burgundy, until they were either smuggled into or sold to new world producers like America and New Zealand, replacing inferior stocks.

Constant intra-winery critiquing and exchange as well as expeditions to Burgundy and the U.S., have provided New Zealand vignerons with an essential understanding of canopy management, ripeness, clonal selection and the importance of limiting Pinot Noir yields, so that they consistently achieve fruit of high quality to offer consumers a viable alternative to Burgundy. All this has happened at an astonishing rate within the last twenty years.

Not surprisingly, Pinot Noir has been the most recent 'classic varietal' to show rapid growth. Its modern day emergence is really a story of the 1990's, although its potential was revealed in several regions during the late 1970's and early 1980's, particularly Auckland during the mid 1970's.** Three areas are now fighting for Pinot Noir supremacy: Marlborough and Central Otago in the South Island, and Martinborough in the north, though the latter two are leading in the quest for the 'Holy Grail'. 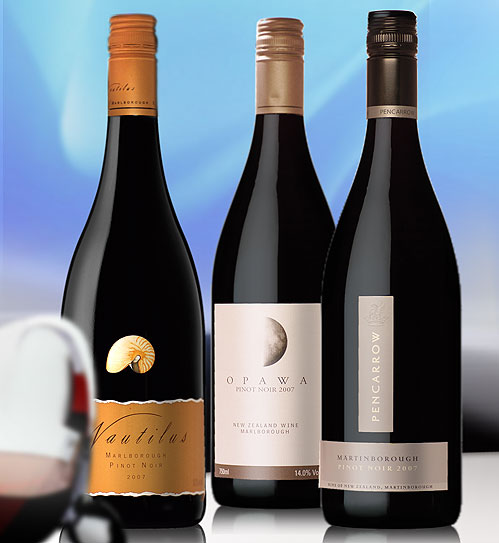 Pinot is now the second most planted grape in Marlborough, where much of it is been used as a base for sparkling wine. Winemakers are in a transitional stage with a fickle grape that demands everything opposite to varietals like Sauvignon Blanc that they're used to: careful site selection, control of yields and vine vigour, delicate hand harvesting and oak instead of stainless steel amongst other considerations already mentioned.

"Marlborough Pinot Noir can be very good, indeed, as good as any Pinot in the country," says Mike Weersing, owner of Pyramid Valley Vineyards."Is it often very good? No. I think this remains the case for two reasons."First, he says, local growers need to learn to handle Pinot Noir differently: They can't push up yields and be blase about viticulture. Second, Pinot Noir requires more thought about site than most growers give to Sauvignon Blanc. "The region is still learning that the Sauvignon Blanc mentality - high yields, little or no canopy management, etc. - cannot be applied to Pinot Noir."(22)

Nautilus is one exception. The Estate have constructed a specialised, state-of-the-art wine making facility dedicated exclusively to Pinot Noir incorporating principles of minimal handling and gravity flow. Fruit is carefully selected and blended from six vineyard sites, usually located on hillside slopes. The wine sells out each year, but at present only accounts for 15% of production.

While Marlborough remains a work in progress, it's names like 'Ata Rangi' and Alana Estate (Martinborough) or Felton Road and Carrick (Central Otago) that are threatening to eclipse the great wines of Burgundy. Martinborough's Pinot Noirs are usually earthier, more Old World in style while a deeper coloured, more fruit driven,  black cherry style is typical of Central Otago whose wines tend to be longer lived. A range of winemaking techniques, including pre and post- fermentation maceration, partial whole berry fermentation, and various methods of tannin, colour and flavour extraction add further variation to regional differences in styles.

In a recent tasting, Neal Martin writing for the Wine Advocate asked whether or not"In qualitative terms alone, New Zealand' s Pinot Noir equal Burgundy? No, not yet."he admits."Does New Zealand offer better QPR? [Quality Price Ratio] Undoubtedly."(23)  U.K. wine writer, Jancis Robinson agrees, writing"The best are nowhere near as good as the best red Burgundy, but the worst are so, so much more delicious than the worst Burgundy." (24)

A critical factor here is time. Pinot vines take at least four years to come into viable production, and around six years to reach full production depending on the trellis system chosen. Truly great Pinot Noir is only produced from mature vines -  heart wood needs to be developed in the trunk of the vine. This is where the flavour components will develop. Many of New Zealand's plantings are less than ten years of age, with a vast majority under five and a miniscule proportion close to twenty five. Clearly, the best is yet to come and it's doubtful that any one region is set to monopolize the future of Pinot Noir in New Zealand, with vineyards all over Canterbury to Nelson and cooler, high-altitude sites in Hawkes Bay burgeoning and showing some serious potential.

* Similarly, in California during the late 1960's, dry style Sauvignon Blanc gained favour but only after it was re-christened and marketed as 'Fume Blanc' (derived from Pouilly-FumÃ©) by industry pioneer, Robert Mondavi.

** And in some places earlier than that: In 1895, visiting viticulturalist Romeo Bragato wrote "There is no better country on the face of the earth for the production of Burgundy grapes than Central Otago..."