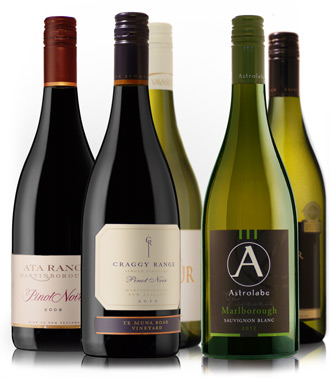 Despite New Zealand's phenomenal success, at present it remains largely a country of boutique, quality orientated family vignerons rather than corporate giants and bulk grape growers. Most winemakers are producing a range of red and white wines and there's surprising variation between varietal styles even within regions.

New Zealand is still discovering itself since it has embarked on a project to classify and quantify its dizzying range of terroirs and micro climates. The array of wine styles it can potentially succeed with seems to be ever growing, including Bordeaux-style blends, cool climate Shiraz, aromatic white varietals like Gewurztraminer and Pinot Gris, not to mention its already world class Sauvignon Blanc and Pinot Noir.  We trust you will find this concise introduction to New Zealand's wine regions stimulates your interest in what is one of the most exciting new wine regions in the world.


Coalescing from the Past.

New Zealand's early experiments into viticulture seem to be little more than a footnote to the staggering advances of recent decades. One finds comparisons with Italy's centuries old, now burgeoning wine industry, more so than Australia's; though admittedly, New Zealand's prolonged internal struggles to discover its latent brilliance took place within a relatively compressed time span.

What obstacles played such a drawn out role in the development of New Zealand wine?
As in Italy, an agricultural economy, poor organisation and insufficient Government support were compounded by internal disputes, foremost amongst these in New Zealand was Prohibition. Even in spite of authoritative and enthusiastic outsiders repeatedly declaring New Zealand's overwhelming viticultural potential, a crisis of self confidence in the value of its own wine industry was inevitable.

It is significant to note that the land was been trialled with vines as early as 1819 when an English missionary, Reverend Samuel Marsden, planted a vineyard in Northland. Marsden, who was no doubt preoccupied with introducing Christianity to New Zealand left no records of ever producing wine, only that"We had a small spot of land cleared and broken up in which I planted about a hundred grape vines of different kinds brought from Port Jackson. New Zealand promises to be very favourable to the vine as far as I can judge at present of the nature of the soil and climate."

The decades that followed were a typical pattern of European colonisation.
French migrants began a wine industry in Central Otago; at Nelson, German & Spanish settlers introduced commercial winemaking practices, as well as the cultivation of hops for beer production (most of the early English settlers preferred beer or spirits to wine anyway); while in Hawke's Bay, West Auckland and the Northland regions, small vineyards were planted by migrants from what's now South Western Croatia. These ' Dalmations' introduced grape varieties that produced higher quality wines, then formed a Viticultural Association. When the consumption of wine fell from over one litre per capita in 1882, to 0.74 litres in 1898, it was lobbying from such groups that  lead to the establishment of New Zealand's 'Department of Agriculture' and the arrival in 1895 of one of the most influential personalities for New Zealand's early period: Romeo Alessandro Brogato (1858-1913;see below for more).

Previously a viticultural consultant to the Victorian government, Brogato travelled throughout New Zealand, evaluating and identifying every modern wine region (except Marlborough). In a report  submitted to Premier Richard Seddon, Brogato praised the young industry, recommended urgent improvements (see below) and correctly predicted that the root-ruining phylloxera aphid would inevitably spread throughout the country. Gradually it did, but instead of re-grafting onto resistant rootstock, many producers turned to low-quality, but disease-resistant hybrid grapes such as Albany Surprise, Baco and Isabella. None of these would ever make great wine, yet they dominated the local industry for years.(1)At the time it didn't matter. On the whole, New Zealanders, perhaps influenced by British traditions, still preferred sweet or fortified wines which could be made from inferior hybrid varieties.

In 1901 Brogato was lured back to New Zealand to take over the Government's research vineyards at Te Kauwhata, 40 km north of Hamilton. Field days attracted winemakers keen to sample the vineyard's wines, receive advice about the best grapes for local conditions and purchase phylloxera resistant rootstock. Brogato's popular 1906 booklet"Viticulture in New Zealand" (which sold 5,000 copies) even showed vignerons how to successfully graft their existing vines onto American rootstock.