An ancient Zapotec legend tells of Mayatl, the mezcal goddess, who fell in love with a handsome warrior and produced a wondrous elixir from her breast for him to drink. Such is one story of the origin of pulque (pronounced pool-kay), Tequila's ancestral drink. Pulque is made from one of three to six types of agave grown in the Mexican highlands, with the exception of blue agave. It is one of about thirty different alcoholic beverages made from agave in Mexico, many of which are still made regionally, although seldom available commercially.

Pulque dates back to at least 200 CE and perhaps much further. It was first made by the Aztecs around 1172-1291 CE, used as a ritual and ceremonial drink but may have been cultivated as early as 1239 CE, according to archeological records. Aztecs were very strict about its use and only priests were allowed to drink a fifth glass of pulque - probably to maintain the mood for ritual sacrifices and cannibalism. Aztec punishment for public drunkenness was beating, loss of public office and even death except on the last five days of the calendar year, known as the 'Days of the Dead.' Seniors were generally exempt from these laws. Other pre-Columbian Mexicans fermented the agave sap into a drink the Aztecs called 'octili poliqhui' - which the Spaniards corrupted into pulque.

The Aztecs also had Tepoztecal, the god of alcoholic merriment. Olmec legend credits the discovery of aguamiel (agave sap) to a woman, Mayahuetl, and fermentation of the sap to her husband, Petecatl. Aztec legend says fermented agave sap was revealed to them by the gods who split a ripe plant with a lightning bolt. To the Nahuatl natives, the agave was divine, represented by the goddess Mayahuel, who had 400 breasts which oozed pulque. When the Spanish arrived inMexico, pulque consumption was so prevalent among the natives, that Cortes described pulque in his first letter to King Carlos V. The drink was exported back to Europe very early, but it is doubtful the brew  could have survived the voyage. 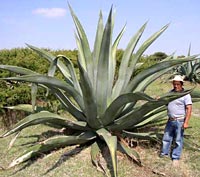 Pulque, like beer, is fermented but not distilled. It is a sweet, milky drink with a low alcohol content of about 4-8% Alc./Vol.,  also containing vegetable proteins, carbohydrates,  thiamine, riboflavin, niacin, pantothenic acid, as well as a beneficial microbial community for the human digestive system. Consequently it plays a role as a nutritional supplement in many communities. Pulque makers sometimes use various fruits to accelerate fermentation. In traditional pulque, a muneca ("doll") was used - a rag or sock filled with human feces  dipped in to start the fermentation process.
To harvest the agave sap, the tlachiquero cuts a cavity into a ripe (10-12-year old) agave pina. The sap flows into this hollow and is siphoned off by hand using a long-necked gourd (acocote) or a hollow stick of bamboo and carried in a pitcher (apilote) . A good agave can last up to a year and produce 2,500 liters of aguamiel. The sap is collected in a wooden barrel and fermented overnight in a place called a timacal. Sometimes it is fermented with cultivated yeast, sometimes from naturally-occurring yeasts (from the air or the leaves of the agave). 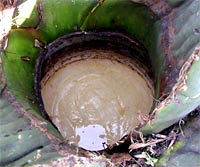 Pulque developed its own rich sub-culture, which remained strong in the rural communities for several centuries, but barely survives today. Each pulqueria had its own name, as did the barrels of foaming liquid - The Brave Man, the Dancing Lady, the Cry Baby, the Repentant Woman. Each pulqueria had its own decor, traditions, drinks and songs. They had murals, games and poetry. Pulque de Apan (from the plains of Apan) was widely considered the best. Pulque glasses were named according to their size: flowerpot (maceta) for the largest (one litre), then came  screw (tornillo) for half  litre, and so on down to the tiny 'cacarizo' used for tasting.

As more and more land fell into a smaller circle of families in the late 19th and early 20th centuries, the hacienda became a restrictive feudal environment. A small aristocracy had absolute control over thousands of indentured and impoverished workers. Pulque was the peon's drink, and often used to keep the overworked farm labourers content through drunkenness. Mondays became 'Saint Monday' or 'Holy Monday'  - San Lunes, the day when workers drank to excess, ate and brawled in the pulquerias while local musicians played. The rich drank French wines and cognac, but were called the 'Pulque Aristocracy' during the regime of Porfirio Diaz,  because of the profit they made from pulque production. 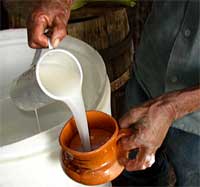 There was a downside to the pulque culture. The unsanitary conditions and the lack of regulation of the hacienda pulquerias led to widespread toxemia (blood poisoning by toxins from a local bacterial infection). At the same time, a strong anti-alcohol sentiment arose, fueled by a campaign in the Catholic press, which propelled the Diaz government to impose legislation reducing the hours of pulquerias, and forbidding them to have music, chairs and even windows. Women were forbidden to enter them. The efforts didn't seem to reduce either alcoholism or toxemia associated with pulque. But the expansion of the middle class during this time probably had the greatest impact, as pulque was abandoned as a lower-class drink. In 1950-51, Dr. Manuel Gamio attempted to get Mexican villagers to plant soya beans to provide additional protein in their diets, and to diminish their consumption of pulque at the same time. His efforts proved unsuccessful.

Today pulque is almost unknown among younger Mexicans living in urban or tourist zones. They tend to prefer American soft drinks or beer. Pulque, however, is still available in some Mexican communities, usually sold as homebrew & made in small pulquerias.  The people who still drink pulque, mostly campesinos, swear by its health properties. One farmer, Guadalupe Hernandez Garcia, in his 70s and still actively farming, recalls when he was sick with some kind of kidney ailment. "I went to the doctor and was given expensive medicines. After a month, I was still sick. I ran into an old guy who told me to drink a liter of pulque everyday. After a couple of weeks I was completely better," said Guadalupe.

Pulque must be drunk within a day after its 36-48 hour fermentation, or refrigerated, and is famous for its awful smell when allowed to putrify caused by albumins in pulque.  A Spanish traveler wrote in 1552 "There are no dead dogs, nor a bomb, that can clear a path as well as the smell of.... (putrified pulq)". If you happen to visit Mexico and are curious, remember that pulque should only be bought at reputable pulquermn­as, as contamination can be a problem if it is not made and stored properly. Many a case of the skitters has been caused by poorly made pulque.