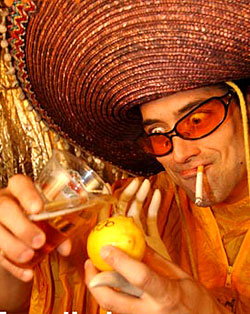 Tequila Myth # 1
Tequila is made from cactus.

There are no Mexican alcoholic drinks actually made from cactus. However, cactus is used in some fruit drinks, salads and other food items. Tequila is made from distilled sap from the hearts (pinas) of the Agave plant (also known as 'maguey', pronounced 'mah-gay').  The plant resembles an unripe, oversized pineapple or spiked cactus. There are 136 known species of agave in Mexico, of which the blue agave is the only one allowed for use in tequila production. For mezcal production, several different species of agave are allowed.

Tequila Myth # 2
Tequila is only 'Moonshine'.

There is a misconception still held by some that agave plants, tequila and/or mezcal have peculiar effects on the nervous system. This myth most likely came from people who assumed mezcal meant 'mescaline' (a psychotropic) and so mistakenly assosciated it with Tequila.  With regard to the production of Tequila, far from being 'moonshine', tequila manufacturers take considerable pride in their product, (especially the anejo (aged) varieties), although each company has its own system, process and degree of quality control. Further, Tequila manufacture is overseen by the Mexican government and the Tequila Regulatory Council. There is also a non-profit council called the Chamber of Tequila Producers which regulates the industry. Statements made on the bottle about age, style and content have legal requirements.  Unlike 'moonshine' the alcoholic strength of tequilas differs little from other common spirits, with the official norm allowing a range from 38-55% Alc./Vol. 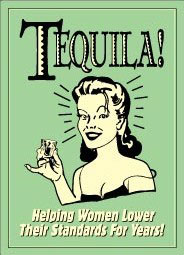 Tequila Myth # 3
Tequila and Mezcal are the same thing.

As outlined on the previous page, technically, tequila is a type of  mezcal, but mezcals are not tequilas. As pointed out above, they both derive from varieties of the same plant (known to the natives as 'mexcalmetl') but  have some significant points of difference, namely:

(a) Region of Origin: Tequila is produced in the northwestern state of Jalisco and a few nearby areas. Most mezcal is produced around the city of Oaxaca and can officially be produced in the states of Guerrero, Durango, San Luis Potosi and Zacatecas.

(b) Material: Tequila is made only from the Blue Agave. Mezcal, on the other hand, can be made from up to five different varieties of agave - mostly espadin, but including some wild varieties such as 'tobala'. Mexican law passed in 1994 now protects the name mezcal from being applied to products made from anything except the allowed and approved plants.

(c) Method of Production: Tequila pinas (the sugar-rich heart of the agave) are baked or steamed in above-ground ovens. Mezcal pinas are baked in a conical, rock-lined pit oven (palenque) over charcoal, and covered with layers of palm-fiber mats and earth, giving mezcal a particularly smoky flavour.  Tequila is double or triple distilled. Mezcal is generally only distilled once (although premium blends may be distilled twice).

Tequila Myth # 4
There's a worm in a bottle of Tequila.

There is a worm called a 'gusano', properly the larvae of a butterfly caterpillar (Hipopta Agavis)  found in some types of Agave plant, but not all. There are two types of worm: the red (gusano rojo) - considered superior because it lives in the root and heart of the plant; and the less-prized white or gold (gusano de oro), which lives on the leaves. The red gusano turns pale in Mezcal, the gold turns ashen-grey. Both larvae are commonly eaten as food and are sold in Zapotec markets. The reason for adding the worm to the bottle of Mezcal is obscure. But one story, that at least has the appeal of logic to back it up, is that the worm serves as proof of high proof, which is to say that if the worm remains intact in the bottle, the percentage of alcohol in the spirit is high enough to preserve the pickled worm. As a rule, top-quality mezcals do not include a worm in the bottle.

There is no worm in Mexican-bottled Tequila, on the other hand.  However some American-bottled brands put one in their bottle to impress the gringos and boost sales. This is a marketing ploy that appeared in the late 1940's - not a Mexican tradition. This truth has been broadcast and expounded for years by the cognoscenti of tequila and the worm-in-the-bottle myth has become somewhat hackneyed. This has not stopped generations of fraternity boys using the worm in tequila as a rite of passage, nor is the practise without its challengers. The exo-skeleton of a scorpion now appears in one Mezcal brand and a related marketing strategy is to attach to bottles a small bag of 'worm salt' consisting of dried gusano, salt and chilli. If you purchase a bottle of Tequila or Mezcal with a worm included, you can eat it - it's quite well pickled. But dispel any idea it has magical or psychotropic properties, that it's an aphrodisiac or the key to an 'unseen world.' It's merely protein and alcohol.

Tequila Myth # 5
All tequilas are the same,
only the bottles are different. 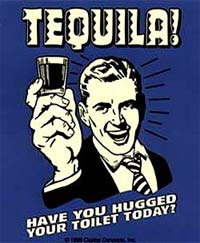 There is actually a surprising variation in tequila flavours - especially between styles like blanco, reposado and anejo. Tequilas can accost you, confront you and challenge you - or they can woo you or seduce you with soft, subtle fragrances and dusky aromas. Like Single Malt Scotch Whiskies, tequilas vary according to the company making them and the source of the Agaves.

The highest-quality Tequila is made using only fermented Agave juice mixed with some water. "Mixto" tequila however, is made by fermenting and then distilling a mix of Agave juice and other sugars, usually cane sugar with water. Mixtos made and bottled in Mexico can contain up to 40% alcohol derived from other sugars. Mixtos that have been shipped in bulk for bottling overseas may have the Agave content further reduced to 51% by the foreign bottler. Mexican law states that all 100% Agave or aged Tequila must be bottled in Mexico. 100 percent agave Tequilas are clearly labelled as such. Anything else is classified as a Mixto Tequila, however the term is seldom used on bottle labels. Generally traditional methods produce much stronger agave flavour than modern, mass production. Aging in barrels also affects the taste, and not always to the better. The woody flavour imparted by the oak can overpower the natural agave. (Some manufacturers are now adding wood essence to darken the tequila so it looks more aged).

Tequila Myth # 6: The best tequilas cost the most.

In Mexico, most of the cheapest tequilas are mass produced for the local market, and usually of the mixto variety (i.e.- not 100% agave). Above that price, they're aiming mostly at the export/premium market. Wooden boxes,  unique handblown glass, crystal, ceramic, and Talavera pottery bottles, many  decorated by artisans, are now common with premium tequilas seeking to differentiate themselves in a crowded market place. While some bottlings have become collector's items in their own right,  packaging adds nothing to the intrinsic qualities of the drink. A well-advertised and promoted Porfidio Single Barrel Anejo at $250 AU is not necessarily a better buy than an El Capricho Reposado at $70. Taste must be the ultimate deciding factor. Some people prefer the rougher edge of the young blanco tequilas with their more distinct agave flavour. Others like the sharper, almost peppery flavour of a reposado. Others still may prefer the smooth, woody aroma in an anejo.  It depends on your taste and what you expect in a tequila.