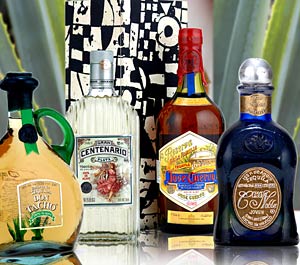 Tipo (type) 1 Tequila: Blanco or Plata (white or silver).
The most common type. It's considered 'unaged' (under 60 days old), and may be bottled fresh from distillation. Sometimes this is a harsh, young (joven) drink, but it can also be tastier and more robust than highly refined varieties if it's marked "100 per cent agave" (see below). Some distillers may 'rest' blanco tequilas in oak barrels for more smoothness - the maximum allowable period is 30 days.

Tipo 2 Tequila: Gold - 'Joven', 'Joven abocado' (young and smoothed, also called gold-oro).
Essentially the same as blanco, but with colouring and flavouring ingredients added to make it look aged. These are also called suave or oro (gold) because of its colouring (usually through added caramel and sometimes oak essence, up to 1% total weight). In the industry they're known as mixto, or mixed blends. Generally they're not as good as 100% agave, but they are also very popular for export sales.

Tipo 3 Tequila: Reposado (meaning 'rested')
This is aged from two months to up to a year in oak barrels. This is where the better tequilas start and the tastes become richer and more complex. The longer the aging, the darker the colour and the more the wood affects the flavour. Reposado accounts for more than 60% of all tequila sales in Mexico and was the first type of aged tequila.

Tipo 4 Tequila: Anejo (aged, or vintage)
Aged in government-sealed barrels of no more than 350 liters, for a minimum of a year. They may be matured longer - up to eight to ten years, although most agree tequila is at its best at four or five years. It is usually removed from the barrels and racked into stainless steel tanks after four years because loss to evaporation is extensive - often 50% or more. Many of the anejos become quite dark and the influence of the wood is more pronounced than in the reposado variety. After three or more years, these anejos may be called "muy anejo" or "tres anejos" by the manufacturers - though these are not  officially recognized terms.

Reserva de casa.
Although not an officially recognized "tipo," Reserva de Casa usually means premium, and may be a limited production variety. Most are also anejo. Other unofficial categories include gran reposado - which should mean it was aged longer than the minimum - and blanco suave. These are attempts by manufacturers to identify their product as unique within the rigid government guidelines for labelling. Both should also be identified as 100 per cent agave.

Tequila Extra Anejo - Ultra-Aged
This is the newest classification of tequila as defined in report from the October 28, 2005 meeeting of the National Committee on Standardization. Utra-aged or Extra Anejo tequila has been aged for a period of at least three years, without specifying the aging time on the label, in direct contact with the wood of oak (holm or holm oak) or Encino oak containers with a maximum capacity of 600 liters. 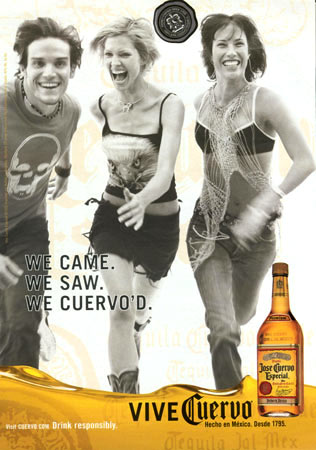 The Changing Face of Tequila.

Currently there are 106 registered tequila distilleries producing 749 certified brands. It can be bewildering trying to decide which to choose, so it is important to know what to look for to get the best product for your money.  In general, Tequila labelled "100% agave" means superior quality, flavour  and purity of spirit that has also been approved by a government inspector. Without this label, cane sugars are used in the fermentation process to produce much of the alcohol, but none of the flavour.   In addition, such tequila can legally be mixed up to 49 per cent with other ingredients and still be called Tequila. Sometimes this means added spirits, but usually it's sugar, caramel and almond essence. Mixto tequilas bottled outside Mexico do not have to live up to the highest standard and may be diluted to 51% agave and adulterated with other non-agave, non-tequila ingredients by the bottler. There is no guarantee as to their quality or even the amount of tequila they contain. Unfortunately, all those non-agave ingredients are usually a recipe for a hangover.  Nevertheless, Cuervo's mass-produced mixto Gold tequila, Cuervo Especial [above], despite not being 100% agave and having additives like colouring, is amongst the world's best-selling tequilas - a credit to their marketing, not necessarily to public taste.

Tequila experts demand quality tequila's produce a 'pearl' (perla or concha - conch) - a bubble that remains on the surface of the liquid. You can shake a Tequila bottle to see if the bubble appears. Sometimes a string of bubbles appear around the rim of the glass when tequila is poured. If the perla doesn't appear, the drink is considered "tequila cortado" or cut tequila, a contemptuous term also meaning mixto.

Another guide to selecting tequilas is to learn to recognize the distillery behind the product. They each have a N.O.M. number supplied by the government and marked on the label. N.O.M. on the label means Normas Oficial Mexicana, usually referred to simply as the NORMAS: it means the tequila meets government standards - but it's not any guarantee of quality. But without the N.O.M. stamp of legitimacy, you can't even be sure it's tequila in the bottle. Many distilleries make more than one brand, some have a dozen or more under the same N.O.M. all competing for space on the same shelf. N.O.M.'s do not indicate the location of the distillery, merely the parent company. The location may also be listed on the label, but it may also be the address of the parent firm, not the actual factory. Some brands like Porfidio and Patron do not have a distillery, but instead purchase what they consider the best tequila from other manufacturers and put their own labels on the bottles. In short, knowing who is making the product can help determine its quality, but often it's a guessing game.

In summary, learn to read the label so you at least know what you are buying. There are many legal requirements for information to be displayed on a tequila label but none of them necessarily mean the contents live up to anything more than minimum standards. There are ten elements you should be able to recognize on any tequila bottle label: 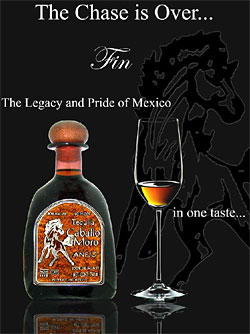 Arguably, there is no single 'best' tequila - although by all reports the ultra-premium aÃ±ejos are just about everyone's favourite. Maybe it's simply because they cost so much.  Indeed, one of the more visible trends is towards premium tequilas at premium prices, as if it were a battle to out-price the competition.

Chinaco became the first company to launch an super-premium tequila. It took U.S. drinkers by storm and demand out-paced production. Many other distillers quickly followed Chinaco's lead. Despite its initial success, Chinaco closed for a few years in the early 1990s, allegedly following the hijacking of a truck full of its product. It didn't return to the market until 1998, by which time it had to compete against considerably more super & ultra-premium tequilas now on the shelves.

At the top end of the scale are companies like  Don Julio, Casa Noble, Patron and Porfidio - the latter topping $250 a bottle in Australia. More expensive are Cuervo's Reserva de la Familia and Herradura's Seleccion Suprema, both of which sell for more than $200 US in Mexico. Topping the lot was a one-litre platinum and gold bottle of limited-edition Tequila Ley which sold for $225,000 in July of 2006 in Jalisco. (The manufacturer has received the Certificate from Guinness World Records for the most expensive bottle of liquor ever sold).

Both Cuervo and Sauza - the two largest producers, respectively - are changing to meet the increased demand for 100% agave tequilas. For a while, Sauza offered Hornitos as its only 100% agave product. Recently it added a 100% agave version of its premium Tres Generaciones and other brands. Cuervo has two 100% tequilas as well: its Tradicional and Reserva de la Familia and in the last few years made its 1800 brand a 100% agave product. Sauza has also introduced its limited-edition 100% agave Galardon, with numbered bottles.

Why the change from frat drink to hip sip? In part it's because the continued prosperity of the North American and European markets allows consumers more time and money to indulge themselves. Premium drinks appeal to those with high disposable income. The boomer culture generally eyes foreign goods and international products with delight and acceptance, rather than the suspicion and xenophobia of previous generations. Tequila is exotic, and mysterious - and has not quite yet achieved the common-place acceptance of most other spirits. Whats'more , in an effort to capture more market share of this growing industry, advertising for tequila products has become  increasingly aggressive. Sauza and Cuervo, for example, have produced their own advertising aimed at winning and keeping consumer loyalty. Tequila magazines abound with slick ads appealing to the connoisseur and the wealthy drinker. Packaging has also been made upscale, with many products re-designed for a more visible shelf presence. 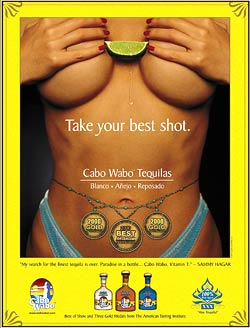 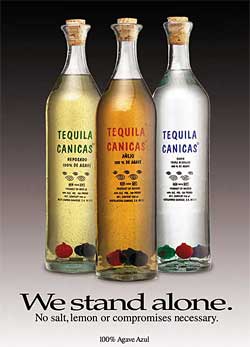 Mezcal is currently undergoing its own revolution in popularity and like tequila,  similar standards for its production have now been established. Many drinkers  are turning to mezcal, perceiving it as a spirit closer to the historical soul of Mexico.  Will mezcal match tequila in production, sales and marketing hype? It's a long way to go - there are currently  700+ brands of tequila available, compared to about 100 mezcals. Small tequila distilleries are being positioned in the same vertical market for discriminating buyers for whom expense is no object and quality is their prime concern. However well this may bode for the local economy, it's difficult to tell what impact increased demand will have on quality and traditional production methods in the future.