Nicks Wine Merchants boast the largest range of Scotch Whisky in the Southern Hemisphere - shipped almost any where in Australia! Browse our amazing selection of rare and unusual whisky here. You can also subscribe to our Spirits and Liqueurs Email Newsletter to keep up to date with new arrivals, whisky tastings, special offers and more. While you're at it, pour yourself a dram, sit back and scroll your way through our Scotch Whisky primer. Today, Scotch whisky is one of the world's leading spirit drinks and also regarded by many as the world's most 'noble' spirit. It is exported to about 200 different markets and frequently outsells every other spirit category. Made from the most elemental of ingredients, water and barley, it has become inextricably woven into the fabric of Scotland's history, culture and customs. Indeed, there are few products which are so closely related to the land of their birth than 'Scotch'.

For Scots, it is the drink of welcome and of farewell, and much in between. With a dram babies are ushered into the world and guests to the house. In the days when distances were traveled only with difficulty, a jug of whisky was left out for any tradesmen who might call. Business deals were sealed with a dram. All manner of small ailments have been eased with whisky - from children's teething, to colds and flu. Departing guests were offered a deoch an doruis, the 'dram at the door' - in modern terms 'one for the road'. The dead-departed are remembered and wished Godspeed with large quantities of whisky. As Charles Shields puts it: "...without an appreciation of whisky, I think a visitor to Scotland misses the true beauty of the country; whisky and Scotland are inseparably intertwined."

The word 'whisky' originates from the Scots Gaelic word "Uisge Beatha" meaning the 'water of life', Anglicised over time to 'Whiskybae'  until finally being shorten to 'Whisky'. Uisge Beathe (or Usquebaugh in the Scots English spelling) itself is believed to be a Celtic translation of the ancient Latin acqua vitae (also water of life). Regardless of what you call it, before Scotch Whisky of any type can be called as such, it must fulfill three main criteria which are defined by law:

Malt Whiskies, which differ considerably in flavour according to the distillery and region from which they come, have a more pronounced bouquet and flavour than the Grain Whiskies. Malt whiskies are predominantly single distillery, made by the one distiller in the one location and so known as 'Single Malts'. They can, however, be made from a combination of distilleries, then known as Pure or Vatted Malts.

The same distinction also applies to Grain Whisky. However, the production of Grain Whisky is not so influenced by geographical factors and it may be distilled anywhere in Scotland. There are about eight operating grain distilleries in Scotland, the majority being in central Scotland with the exception of Invergordon in the northern Highlands and Girvan in the far south. A third category, Blended Scotch whisky, may contain a combination of whiskies from over 10 or 50 different malt and grain distilleries.

While blended whiskies dominate sales world-wide, it is the Single Malts that attract the most serious attention, largely because each has its own story to tell, and each has its own stamp of individuality. Malt whiskies evoke the romance of Scotland in a way no blend can, reflecting the history and mystique of the spirit, its unique warmth and comfort, a constant and friendly companion in a land of long, bitterly cold winters. 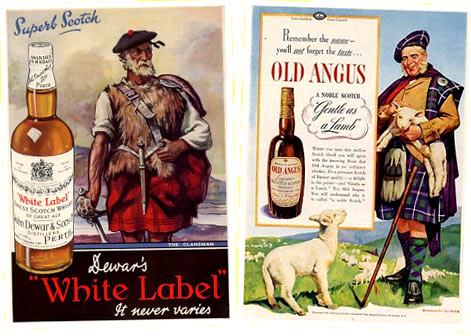 Two contrasting images of Scotch Whisky from early advertisements, defining the spirit as at once bold and steadfast in style, but not without its gentler side.

Whisky: With an 'e' or Without?

Whisky may mean Scotch whisky to most of the world's population, but it is often wrongly substituted by the spelling 'whiskey', or even mis-spelt: 'wiskey', 'wisky'. Much of this misunderstanding originates from the fact that there are a number of countries that distil their own whiskies (or whiskeys). Scotch whisky is by far and away the largest selling and most renowned; however, local spirits distilled in Ireland, Japan, Canada, America, Australia and India are also known as whiskey (whisky). 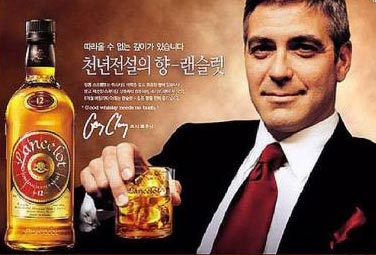 Today, personalities from all walks of life are employed in the promotion of whisky. In this example, actor George Clooney promotes "Lancelot" to the Koreans,
Asia being one of Scotch Whisky's most lucrative markets.

Japanese Whisky, Canadian Whisky and Indian Whisky are also spelt without an 'e'. It is believed that Japanese Whisky is spelt this way as a result of Japan's first whisky distillers learning their trade in Scotland, in the early 1920's, thereafter adopting the Scottish convention. Canadian and Indian Whiskies, it is thought, in a similar vein embraced the spelling when they were part of the British Empire.

Historically, Irish Whiskey distillers inserted an 'e' to their spelling to differentiate their product from Scotch Whisky. American Whiskeys, both Bourbon and Rye, have in general taken-up the insertion of an 'e'. Though, as you would expect in this vast country with much Scottish ancestry, there are some distillers whom prefer to adopt the Scottish practice.

Nick’s Wine Merchants offer a vast range of rare Scotch whisky as well as Tasmanian whisky online. Whisky lovers who also enjoy wine will note that we also have a fantastic range of wine online. Our selection begins with a vast range of Australian Shiraz right through to Italian wines, French wines and more. Whatever you're after, remember, we ship Australia wide!