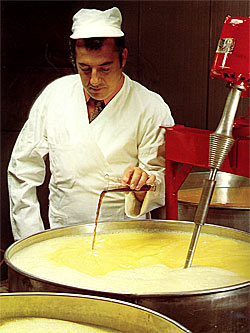 An egg to me is a miracle and a thing of beauty. It is packaging taken to the ultimate. It is almost a complete food and it makes a wondrous liqueur. The domestic hen we know today is probably descended from the Red Jungle Fowl of India where for over 5,000 years it has been raised in captivity for its eggs, its flesh and the ability of the male birds to fight like demons. Down through the centuries we find historical references to fowls and their produce. They were obvious naturals as world travellers since they required little space aboard ship or caravan. Their food was easily stored in a concentrated and non­deteriorating form in the way of cereal grain and best of all they worked their passage by producing their bounty of fresh eggs every day or so. And as a last resort, they provided items of fresh meat of meal-size proportions. Not only were eggs used as a food of course. It is recorded that the Spanish conquerors of Peru when building the first bridge of stone at Lima in 1610 used the whites of 100,000 eggs as a binder for their mortar. This bridge is still in use, unchanged to this day.

But we are most concerned with the yolks, those glorious golden orbs of creamy liquid so full of protein, vitamins and minerals. They contain all the vitamins (with the exception of vitamin C); A. D. E. K. B1 (Thiamin) B2 (Riboflavin) B6 (Pyridoxine) amongst others. They are a natural source of iron, phosphorus, calcium, sodium, potassium, sulphur and iodine, all necessities to good body growth. And they are rich in protein and amino acids while being comparatively low in carbohydrates and therefore calories. The fact that things are good for you has however, never had much appeal as an argument, as any mother of young children knows. Eggs transcend this mundane appeal and so we have the whole host of superb egg concoctions which go to make eating a joy rather than a chore; creme caramel, glorious refinement of the baked custard with its tangy caramel sauce, creamy omelettes and fluffy souffles, Quiches lorraines, egg and bacon pies, chocolate mousse and advokaat.

A mundane and prosaic dictionary definition of Advokaat is "a beverage resembling egg nog made of brandy and egg yolks and so thick it may be eaten with a spoon". What a poor limping description that is and how short it falls from an indication of the true picture. Advokaat has all the wealth of colour of golden yolks, plus the warmth of fine brandy, the subtle beauty of vanilla and the wonderful sensation of thick cream all blended softly and smoothly together. It can be, and is frequently, made at home but, in my belief anyway, is best left to experts who can control the ingredients and the processes so as to produce the very best result each time. Needless to say the eggs must be chosen with the greatest care, each one must be absolutely fresh. After separation from the whites, the yolks are beaten to a lather to ensure a good even mixture which is then filtered to remove any skins of the yolks or albumen. To this strained mixture sugar solution is added and thoroughly "Roused" or intimately mixed. Following this, the sweetened egg yolk mixture is carefully transferred to the fortifying spirit and to avoid curdling this must be done very gradually. When all the sweetened mixture has been added the rummaging is kept going for some time to prevent clotting and finally the liqueur is left to settle and marry. The photograph at the top of the page shows this operation.

Of course the quality of the spirit must be considered. In Australia we are blessed with a ready source of extremely high quality locally produced brandy which when properly matured suits our purpose adequately. But I will discuss this in greater detail in the next chapter. There are of course flavoured advokaats of which the best known is Cherry Advokaat. We make this with a number of flavour ingredients of which Cherry is the principal. In Europe and elsewhere advokaats are flavoured also with coffee, chocolate, lemon and mint, but they have not, to date, found much favour here.*

Finally, as to usage; Advokaat may be enjoyed as a liqueur neat without any additions or it may be used as a base for an excellent long drink by adding milk, hot or cold, with grated nutmeg on top or with sparkling soft drinks such as lemonade, dry ginger and even orange juice. Personally I like it straight, to enjoy its rich creamy texture, its warmth of colour and aroma and its sheer goodness of eggs and old brandy. And then I call blessings on the Dutch who first blended it.

*Warninks in the Netherlands, established in 1616, is the largest manufacturer of quality Advocaat in the world. Some staggering statistics demonstrate the degree of production involved at their plant which uses upwards of 60 million eggs a year; supplied by 300,000 freelance employees on specially contracted chicken farms. The companies four egg breaking machines separate 18,000 yolks and whites an hour each - that's 72,000 yolks an hour that go on to be mixed with sugar, brandy and vanilla before being stored in tanks for a period of maturation.