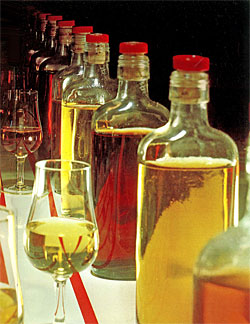 Right throughout this little treatise on liqueurs I have referred to Brandy and other spirits and this was so because all liqueurs, by definition, must have some spirit in their make-up. Alcohol is produced by the action of yeast on sugar, Fermentation in short, as I mentioned in the first chapter on our History. The source or availability of the sugar may be simple and immediate as it is in grapes or sugar cane or it may be complicated and require an intermediate process as in the starchy grains. However following Fermentation, the alcohol must be concentrated, increased in strength, by Distillation in order to obtain spirit.

Distillation of Spirit is done by one of two methods; the Pot Still and the Continuous Still. In the Pot Still Method the still, which is a huge copper pot, bulbous at the base and narrowing to a goose-neck or Alembic at the top, is charged with a quantity of wine. The still is heated from below and the vapours pass up through the gooseneck then down through a condenser where they condense into a liquid which is finally collected in a receiver. The Continuous Still Method is much harder to describe without an elaborate diagram but suffice to say it does what its name implies; the low strength wine or "wash" as it is called enters the still in a continuous stream and after being heated it flows down a series of perforated copper plates in a column up through which steam is rising. The steam collects the alcohol in ever increasing quantities until it is drawn off, passed through a Condenser and collected in a receiver. The Pot Still method retains more flavour but is much slower than the Continuous still which distills at a higher strength in a more efficient way.

Brandy is produced in most wine growing countries and the finest are made by the Pot Still method. The best brandies are the French Cognacs and Armagnacs. The secret of good Brandy making lies partly in the quality of the wine to be distilled, partly in the distillation process itself and finally in the age and the wood in which it is aged. 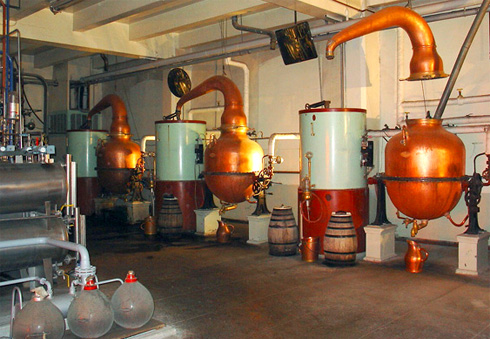 Contemporary set up of small copper pot stills at the Chartreuse distillery in France.

Rum made from the by-product of sugar production - Molasses - retains a great deal of the natural taste factors of its origin. The molasses is fermented and distilled by either method and matured in wood. Rum may be water-white, through amber to mahogany in colour and range from extremely light in flavour through to extremely full-bodied, heavy and almost oily. Australia produces some of the world's best rums although they are not as well known away from Australia as they might be. All rum must be wood-aged. 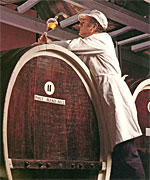 Whisky (or Whiskey as it is spelt in Ireland and America) is somewhat different to Brandy and Rum in that it is made from cereal grains. Hence an additional step is required in the spirit production; the grain requires to be crushed then partially cooked to release its starch which in turn has to be converted to sugar by the action of an enzyme contained in Malt. After this is done fermentation and distillation can proceed as before. Pot Still and Continuous Stills are used but the finest flavoured whiskies result from the Pot Still. All whiskies, wherever produced, must be aged in wood for a minimum of three years before they are able to be sold as whisky in Australia.
For more information on Scotch Whisky, click here.

Gin is most generally now produced only from neutral grain spirit by a re-distillation process through a Gin Still in which Juniper berries and other botanicals impart their flavour to the Spirit. It must contain Juniper but the other flavourings may include such things as Coriander, Angelica, Caraway, Aniseed, Cardamom, Orange Peel and dozens more. The neutral spirit must of course be clean and tasteless and hence most spirit for gin is produced in Continuous stills from grain. Gin is not usually matured.

Vodka was originally made in Eastern Europe and Russia from potatoes but nowadays when made in America, Great Britain, Australia and most other countries, it is produced from Grain Spirit; fairly tasteless, neutral and highly rectified. It is usually double-distilled and then passed through charcoal filters to remove all flavour and bouquet. Its chief charm for its devotees seems to be its lack of flavour and smell. Certainly it mixes well with such things as Orange juice and Tomato juice. As a base for Martini and other Cocktails it cannot be faulted. Like Gin, it is not required to be matured.

Neutral Grain Spirit. This is not a beverage spirit as such but because it plays a large part in liqueur making, I must mention it here again. The purest fraction from the Continuous Still is redistilled to give a spirit that contains in excess of 96% of pure Alcohol and in so doing the distillation removes all compounds (other than Ethyl Alcohol and water) to a content of only a few parts per million. In other words, it is as close as the distiller can get to a pure alcohol which has no odour and no flavour other than the flavour of alcohol itself. We use this spirit when we want no flavour to obtrude and compete with the natural flavour of the liqueur we are making.

RAW MATERIAL. We have shown two sources of raw materials, grain and grapes. These are the most commonly used, run a close third by Sugar Cane. There are many others of course. The one attribute they all must share in common is that they contain sugar, freely available, or starch in a form which can be readily converted to sugar. It is only from sugar that we can obtain alcohol. 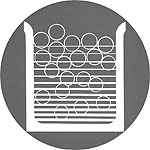 PRESSING AND CRUSHING. In the two diagrams above we have shown, firstly at left, the grapes being pressed to release their sugar laden juice which can go immediately to the fermenter. At the right is shown the crusher for the grain. This produces meal or "grist"; a coarse flour in fact which requires an intermediate process (not in the diagram) of cooking to soften the starch grains followed by a mixing with malt. The malt contains an enzyme, Diastase, which converts the starch to sugar. Only when all the starch has been converted to sugar can the solution (called "wort" in the spirit industry) be sent to the fermenter.

FERMENTATION. In the fermenter shown at left, yeast is added to the grape juice or the wort. The yeast immediately commences its work of consuming the sugar and converting it to Alcohol. In the course of this action, the yeast, which is a single-celled organism, repeatedly divides to produce two cells each time. By the time all of the sugar has been changed to alcohol there has been a huge increase in the volume of yeast and a large production of the other by-product of fermentation, Carbon Dioxide gas. Different yeast species produce different flavours in the resulting alcoholic solution; called respectively wine if we commenced with grapes or "wash" in the case of grain.

DISTILLATION. From the fermenter the alcohol solution goes to the Still. We have shown in the diagram a Pot Still and a Continuous Still. The Distiller will know and decide which he will employ. If he has the time and the need for a relatively low-strength spirit with an abundance of the natural flavour of the base product he will use the Pot Still. Cognacs and malt whiskies are made by this method. If however he requires a good fast run of high strength clean Spirit he will use the Continuous Still. Much good Brandy and Whisky Spirit is made by the Continuous method and, nowadays, nearly all Spirit for Gin and Vodka.

MATURATION. With the exception of Gin and Vodka and neutral spirit from grape or grain, all potable spirits such as Whisky, Brandy and Rum must by law in most countries of the world and certainly Australia, be matured for a minimum period, usually three years, in wood. This period of rest has a quite remarkable effect on their palatability and general aspect. It changes them from somewhat rough and fiery products to gentle, smooth and attractive spirits. And no one really knows why. There are some obvious small chemical and physical property changes but the deep and abiding softness and beauty which comes to a spirit long in wood is a puzzle that eludes us.